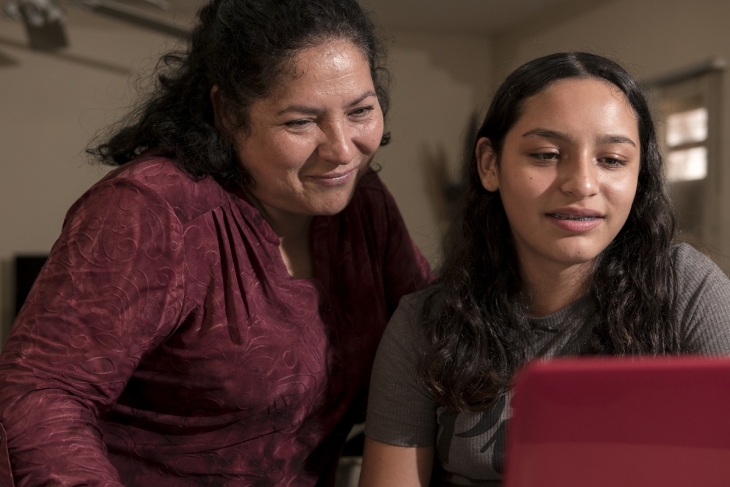 Earlier this month, the Ohio Department of Education (ODE) sent family score reports to school districts. These reports, which districts are now supposed to distribute to parents, offer detailed information about how their children performed on state assessments this spring—especially crucial data as parents seek to understand where their child stands in the wake of Covid-related disruptions. For many moms and dads, these reports reinforce what they saw on their child’s report cards during the year. But for others—in an era of grade inflation—these reports might offer a “second opinion” that cause them to rethink their child’s learning needs.

Overall, Ohio currently has a decent system in place for communicating results, but it could improve the reporting to parents in two significant ways: expediting the release score reports, and improving their presentation.

In the age of online assessment, one might think that parents receive results shortly after their children take the exams. But that’s not true. Most parents have to wait months before they see test scores—too late, in many cases, to seek summer supports or plan for the coming fall. That’s not acceptable in normal times, but it’s particularly worrisome this year, as more parents than usual explore ways to help their children recovery after the pandemic.

Table 1 displays the timeline for this spring’s state exams. Students took math and English language arts (ELA) exams sometime during the mid-March to early May testing windows. School districts receive math results in an online reporting system rather promptly—about a month or so after testing—but they wait longer for ELA (likely due to grading of writing sections). However, just because schools can access results then doesn’t mean parents can. While some districts proactively post results in their parent portals shortly after online receipt, others leave parents waiting for hard copies. Printed versions didn’t arrive in district mailboxes until July 18. After that, it’s unclear how and when districts decide to send reports home to parents. Schools could mail them right away, but others might delay until class is back in session. Some may even send reports home in kids’ backpacks where the information can get lost in the flood of other back-to-school paperwork.

State policymakers have some options to speed this process. One is to create a statewide online portal, akin to what Texas has developed, where parents can register and get their child’s results directly from ODE or the assessment vendor—a service that does not currently exist. (A voluntary signup option is likely the only way to communicate results directly to parents, as there is no statewide “roster” with contact info.) Another alternative is to set clear deadlines for distribution. Legislators could insist that ODE send printed copies to districts by June 15 and require districts to mail them home to parents by June 30. A final legislative possibility is to require districts to post student test scores to parent portals—if they have one—as soon as they are made available digitally.

Surveys from Learning Heroes find that the vast majority of U.S. parents—nine in ten—believe their child is doing math or reading at or above grade level. Many are undoubtedly influenced by the high marks that come home on their child’s report card: Upwards of 80 percent say their children receive mostly A’s and B’s. The assessment data, however, reveal fewer students achieving at such high levels. In Ohio, roughly 55 to 65 percent of students meet the state’s proficiency standards and even fewer achieve marks on exams that indicate being on track for college (about two in five).

Ohio needs to make sure that parents get an honest, complete picture of their child’s academic performance. But what is on them? Figure 1 displays the key information on a student’s test-score report in math. The basic data are a student’s scaled score and the corresponding achievement level. In isolation, the scaled score will mean little to parents (706 in this fictional example), but the translation into an achievement level (proficient) provides more context about a student’s academic standing. Also valuable are the comparisons of a child’s scaled score to the local school and district average, and the statewide average. A breakdown of a student’s results on the specific areas of the exam also appears, allowing parents to better pinpoint their child’s strengths and weaknesses. 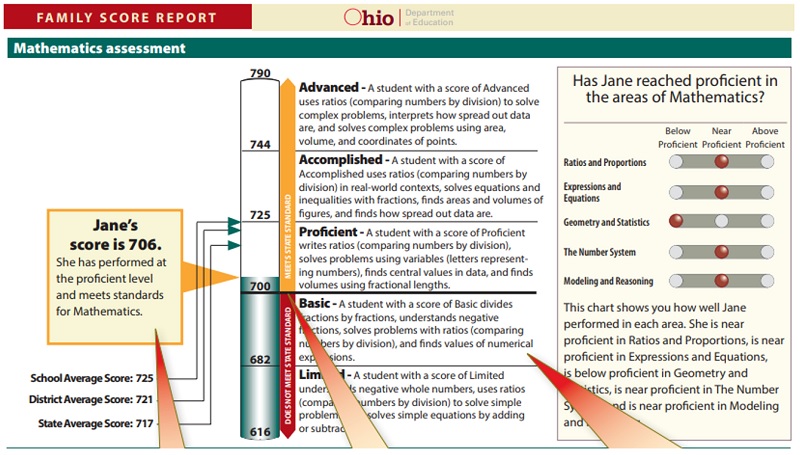 While the basics are there, two pieces of information would offer parents a clearer picture of their child’s academic standing.

First, current score reports don’t provide a longitudinal picture of student performance over time. Parents only get single-year snapshots, so unless they keep historical records, they don’t get an indication of their child’s progress. To fill this gap, the state should display a student’s statewide percentile ranking over time and changes in the achievement level for the tested subject. Previous years’ scaled scores could also be displayed, but those may not be comparable from one grade to the next.

Second, Ohio’s reports don’t provide a clear enough signal about whether a child is on-track for success in college. Achieving the proficient mark—which is considered “passing”—could mislead parents into thinking their child is on pace to graduate ready for college. But buried within the fine print of the score reports is a note that reaching the accomplished level of performance—one level above proficient—actually indicates a student is on track. This distinction must be more than a footnote. Ohio could also more clearly communicate college readiness by including projections of a student’s ACT or SAT score starting in middle school. SAS, the analytics firm that calculates value-added scores, already does these projections, so all the state needs to do is include them on test-score reports. To be sure, higher education isn’t the goal for everyone, but transparent information about readiness should be available to all.

Ohio parents make hundreds of decisions—some big, others small—on behalf of their children. Do we spend more of our household budget on afterschool tutoring or summer school? Do we enroll our child in this or that enrichment program? Which elective courses or programs at school should we be encouraging? No single report will be able to answer every question, but the more information parents have about their child’s academic progress, the better. Other states, with assistance from parent-focused groups, have stepped up their game in communicating results to parents. Ohio, too, can make sure that parents get information that helps them support their children.