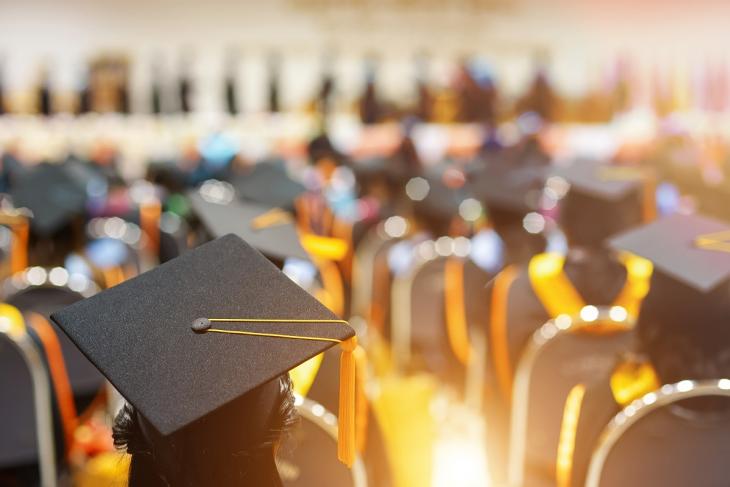 The Knowledge is Power Program, or KIPP, is the nation’s largest charter school network. It currently operates 240 schools that serve more than 100,000 students, the vast majority of whom are low-income students of color. The network is widely known for its sizable impact on student achievement, as demonstrated by standardized test scores, but there are less data on longer-term outcomes like college enrollment, persistence, and completion.

To remedy this lack of post-secondary data, a recent report examines two key questions: the impact of KIPP middle schools on students enrolling in four-year colleges, and the impact on students persisting in those colleges for two consecutive years after high school graduation. The report follows a sample of 1,177 students who applied to a fifth or sixth grade admissions lottery for the 2008–09 or 2009–10 school year in the hope of enrolling at one of thirteen oversubscribed KIPP middle schools located throughout the country. Data from a total of nineteen admissions lotteries were used, with each lottery representing some combination of school, cohort, and entry grade levels.

The report uses a variety of sources: college enrollment data from the National Student Clearinghouse, administrative data from the Integrated Postsecondary Education Data System, and student rosters provided by the KIPP Foundation. Baseline data on the sample came from a prior KIPP middle schools study that included lottery application records and demographic and socioeconomic information.

The authors used a random assignment design to ensure that treatment and control groups were similar on both observable and unobservable characteristics. They conducted two analyses. First, they used a primary impact estimate to compare students who received an admission offer via the lottery to students who didn’t. They note that this is a more conservative approach, since it includes students in the treatment group even if they declined their enrollment invitation. In an exploratory analysis, however, the authors focused on students who actually attended a KIPP school in order to more directly measure KIPP’s potential effects.

Now for the findings. First, KIPP middle schools had a positive and statistically significant impact on enrollment in four-year colleges. On average, students who received an admissions offer were 6.9 percentage points more likely to enroll in a four-year college than students who applied to a lottery but were not offered admission. When focusing on students who actually attended KIPP, the impact estimate nearly doubles to 12.9 percentage points. They note that an effect of this size represents a “meaningful change” in college enrollment rates given the national gap between white and black or Hispanic students. To wit, “The impact of attending a KIPP school (10 to 13 percentage points) would be almost large enough to erase the nationwide racial disparity in college enrollment rates,” write the authors.

The effects on college persistence are also encouraging, though not quite as clear as the enrollment findings. The primary impact estimates indicate that students who received KIPP admissions offers were 4.8 percentage points more likely to enroll in a four-year college after high school graduation and remain enrolled for two years, although that difference was not statistically significant. Digging deeper, the exploratory analysis found that roughly 33 percent of students who attended KIPP enrolled in a four-year college and persisted for two years, compared to around 24 percent of student who did not attend KIPP. However, this difference of 9 percentage points was not statistically significant.

Overall, the magnitude of KIPP’s impact on four-year college enrollment was larger than for college persistence. The authors explain that this difference could be due to multiple factors. For instance, the initial enrollment effect could be fading over time if treatment group students drop out at higher rates, enroll in college later, or transfer from two-year to four-year colleges at higher rates.

The students in this study have only had enough time to complete two years of college, so it’s still too early to know whether KIPP will lead to improvements in college graduation rates. But the authors note that the estimated impacts on persistence are worth considering in relation to potential future college graduation rates. “If a future study revealed that KIPP middle schools ultimately do have an effect of approximately 9 percentage points on college completion, that effect would be equal to more than a third of the degree-completion gap for black and Hispanic students,” they write.

If this does indeed turn out to be the case, KIPP deserves considerable praise for helping more students get to and through college. It’s also worth noting that KIPP has changed its model considerably since the late 2000s when the students in this sample were in middle school. These changes were made in part because the network reviewed its own data and found that many graduates were getting to college but weren’t making it through college. As a result, it’s possible that KIPP’s long-term impacts will get even bigger over time once researchers begin to study samples of students that attended KIPP after the network’s changes.