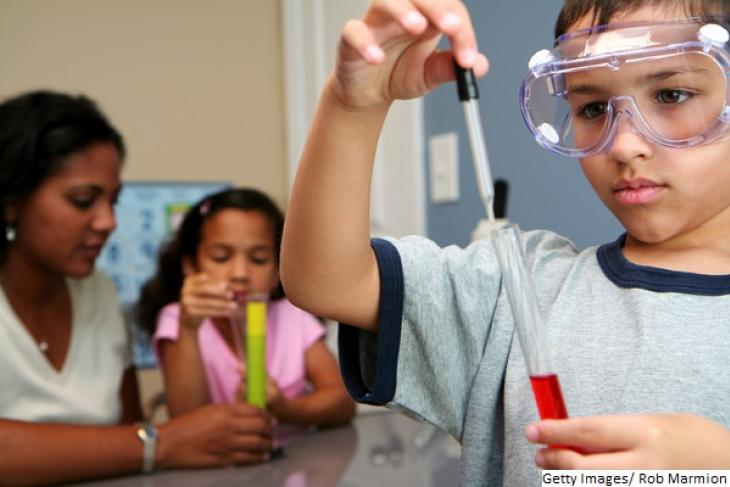 If there is one thing that has haunted me over the years as an educator (now former) and as a mother, it is the disparity in expectations for students that glaringly breaks down around race and class. And Rhode Island is no exception. While students of means are often pushed to write thesis statements—and defend them!—in the early grades, black and brown children are far too often consigned to years of book reports and worksheets that don’t push their thinking or provide them with the opportunity to prove how incredibly smart and capable they are.

Well, cue the confetti and hallelujahs because Roger Williams Middle School is changing that. That’s right. Sixth grade students on the south side of Providence are part of a pilot program designed to offer advanced coursework—the Advanced Academics Program—and they are proving to be more than up to the task. In fact, the demand is greater than the number of seats available. Students are selected for the program based on attendance, teacher recommendation, and standardized test scores and there are currently more qualified students than there are spots in the program.

Shaking off that deficit mentality

The south side of Providence is known as a depressed area where poverty is the norm and the school system has been plagued by decades of academic under-performance and high dropout rates. Wikipedia describes the south side this way:

The area continues to struggle with poverty issues; the south side’s median family income is $23,379 as compared with $32,058 for the city as a whole, and more than one out of three families lives in poverty. 52.3 percent of south side residents are Hispanic, 24.4 percent are African-American, 12.2 percent are white, 9.1 percent are Asian, and 2 percent are Native American. 64 percent of public school children under the age of six speak a language other than English as their primary language. Nearly one in four children has been exposed to unsafe quantities of lead.

It’s nothing like Providence’s east side where the who’s who of Rhode Island choose to live and where income and education levels are high, a majority of residents are white, and a large percentage flock to private schools to avoid using the city’s schools.

So while tragic and wrong, it’s no surprise that advanced coursework and gifted programs have been virtually non-existent on the south side of Providence, despite it being the area of the city in which a majority of Providence public school students currently live. Until now.

Under the federal No Child Left Behind law, the drive has been to move low-performing students to grade-level proficiency. Gifted-education programs have largely been the purview of middle-class schools, where students, many of whom were already high-performing, passed a standardized test to enroll in more challenging classes.

Now that more than half of all public school students are coming from low-income families, urban districts like Providence are beginning to rethink who should have the opportunity to participate in advanced academic classes.

And the kids are embracing the challenge and finally able to feel proud of the work they’re doing. According to the Providence Journal, students in the gifted STEM class love being able to say that as sixth graders, they are doing eighth grade level work.

“If you’re bored, they’ll come up with something,” said Hunter Maloney, age eleven. “The teachers make it so much fun.”

Math teacher Jeff Glantz celebrates the move from focusing almost exclusively on remediation to providing the higher end students with what they need.

“We’ve been so focused on the kids who need remedial help,” said Jeff Glantz, a math teacher. “It’s nice to add classes on the higher end. Now we’re asking, ‘How can we help these other kids excel?’”

Jonathan A. Plucker is an education professor who specializes in gifted and special education issues at the University of Connecticut, and he agrees with Glantz.

In no way am I saying closing achievement gaps isn’t important; third grade students should be able to read at a third grade level. My concern is so many of these kids in low-income settings in third grade ought to be reading at a sixth grade level. So much of our policy, interventions, and education system treat proficiency as the end zone, when it ought to be a yard marker.

The pilot program at Roger Williams Middle School is a start. And worthy of celebration. But the reality is, Providence serves over twenty-three thousand students and common sense tells us that so many of those kids are capable of much higher level work than they are getting. The sixth graders now doing advanced coursework on the south side are shattering stereotypes and helping to push back against a generations old deficit mentality when it comes to poor kids of color in America’s schools.

When I asked Providence Superintendent Christopher Maher for his thoughts, he had this to say:

At Providence Public Schools, we know that our children thrive when they are actively engaged in learning. The Advanced Academics Program offers high-performing middle-schoolers new opportunities for in-depth study beyond the basic curriculum. Challenging our brightest students is just one way we create individualized learning experiences for Providence students.

While Advanced Academics has been in existence for many years at Nathanael Greene Middle School, this year we were able to expand the program to a location on the city’s south side, Roger Williams Middle School. Our hope is that this expansion, and further expansion of the program in the future, can provide Providence middle-schoolers with more options for high-level, personalized learning.

I applaud Maher and all on his team who pushed to bring the Advanced Academics Program to Roger Williams Middle School. It shows leadership on what is perhaps the most important issue of all: equity. This first step just may be the catalyst for change that we so desperately need if we are to ever achieve true equity of expectations in our schools.

Erika Sanzi is a former decade-long educator, a former school committee member, a mother of three young sons, and an education advocate who consults for Education Post and writes at Good School Hunting.