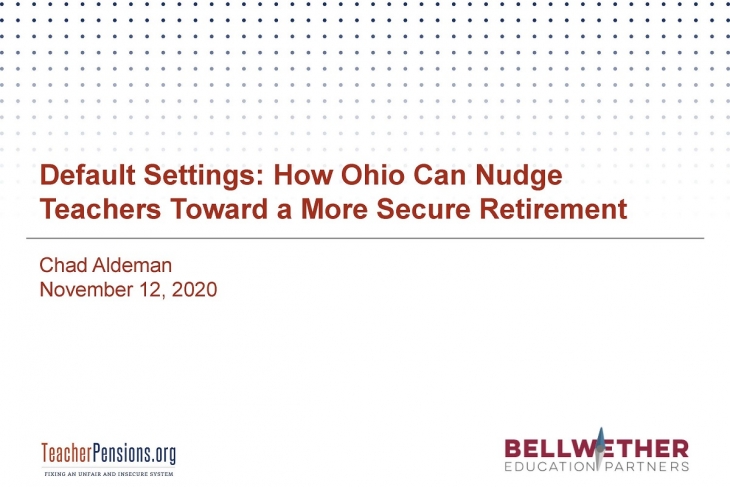 This week, Fordham released its latest report, an analysis of the three retirement options available for Ohio teachers. The research, conducted by national pensions expert Chad Aldeman of Bellwether Education Partners, calculates the financial benefits offered by each plan.

In conjunction with the report release, Aldeman presented his findings at a virtual event. He began with some important background. In Ohio, the State Teachers Retirement System (STRS) manages the retirement benefits of nearly half a million active, inactive, and retired public school educators. Approximately twenty years ago, Ohio leaders chose to provide teachers with a choice between three retirement plans. The Buckeye State is one of only five states that offer such a choice. The options are:

Once hired, new teachers are given an election form to make their choice. If they choose not to fill out the form, the system automatically enrolls them into the default option, which per state law is the defined-benefit plan. Approximately 78 percent of teachers don’t make a decision, and thereby default into the traditional pension option.

It’s unclear why such a large number of teachers choose not to make an affirmative choice. However, Aldeman pointed out that research generally indicates that employees view defaults as recommendations. It’s possible that teachers opt for (or default into) the defined-benefit plan because they assume it’s the best one. Regardless of why teachers choose—or don’t choose—their plans, though, there’s no denying that the stakes are high. Ohio does not permit public employees to change retirement plans once they select one or to draw social security benefits. That means Ohio teachers are dependent on the STRS plan they choose for their retirement.

But that’s not all that’s worrisome about the state’s default plan. In the last few years, defined-benefit plans have undergone significant changes as Ohio has gradually phased in benefit cuts for new retirees. For example, STRS removed a higher benefit multiplier that was previously available for teachers with thirty or more years of experience. In addition, the final average salary figure was reduced and the retirement age was increased. This means teachers must now work longer, but they get fewer benefits in return. The cost of living adjustment was also decreased from two percent down to zero, so STRS benefits no longer adjust with inflation. All things considered, the defined-benefit plan is becoming an increasingly poor option.

If the state wants to do right by its teachers, the best path forward is to change the default plan from the defined-benefit option to either the defined-contribution or combined option. This would “nudge” teachers toward the plans that offer them the best benefits in the long run. Aldeman was clear that changing the default plan would not affect current retirees or workers. It wouldn’t take away teachers’ choice, either—new teachers are still free to select whichever plan they desire. But given that default options hold so much sway, especially for young teachers, the state has a responsibility to make sure the default plan is the best one.

The presentation was followed by a question and answer session for event attendees. One attendee asked whether there is evidence that pension plans can help with teacher retention. Aldeman explained that the research suggests that pensions are not an especially strong recruitment incentive. “People don’t make decisions based on the pension itself,” he said. “Teachers don’t react to that benefit. They’re making decisions based on salary, geography and other life aspects.”

Another attendee wondered if the state was educating new teachers on their options. “STRS does have an office dedicated to this,” Aldeman replied. “Any member can call them up and ask for some guidance. There’s guidance documents on the STRS website. To STRS credit, they’ve done a good job of that.” But he also noted that there’s always room for improvement. “I do think this nudging is a very powerful element,” he said. “In Ohio, the defined-benefit plan is not a great benefit, and the workers are not getting a good deal out of it.”

Given the hard work that Ohio teachers do every day on behalf of students, it’s important that the state’s retirement system does right by them. Teachers deserve a choice, and their three options should remain intact. But it’s also important for the state to ensure that the default option is the best one. That means moving away from the defined-benefit option.