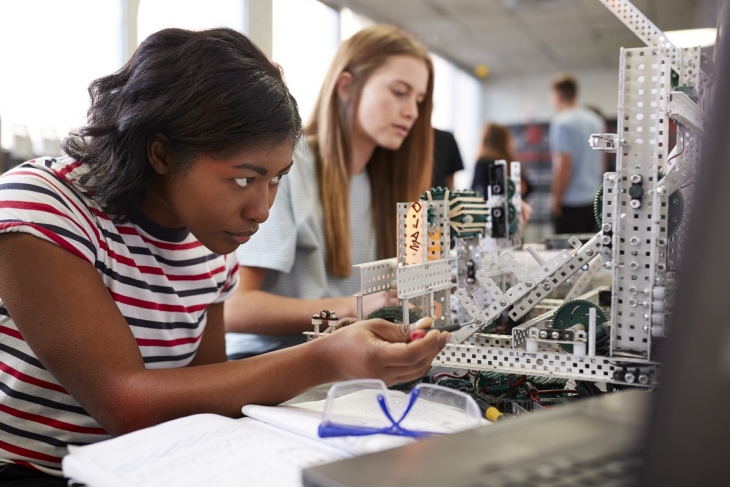 In policy circles, school choice and desegregation discussions often stop at the schoolhouse door. But a timely new book edited by a high school senior from Columbus goes inside the gates, and should be essential reading for anyone working in education at any level.

Black Girl, White School is a strong reminder that the students who attend charters or private schools aren’t just statistics or dollar amounts, but real people who are willing to leave familiar terrain in pursuit of a better education. Given the segregating nature of school district boundaries, such decisions often mean that students of color attend predominantly White institutions (PWI). Such is the case for the book’s editor Olivia V.G. Clarke, as well as the volume’s other contributors, who range from fellow high schoolers to college students to young adults who are now part of the working world.

Clarke herself seems to have thrived at Columbus School for Girls (CSG), a highly-regarded, secular, independent, K–12 private school. She will graduate a year early thanks to the availability of academic acceleration. But as the book’s subtitle suggests, academics often take a backseat to racial dynamics. According to GreatSchools, CSG’s student body is 31 percent non-White, but Clarke often felt that she was the “token” Black student, and therefore required to represent all Black people to White students and teachers. In one of many letters to her younger self, Clarke writes: “Suddenly and often unfairly you become a representative for all people of your ethnic background.” Various other contributors express similar experiences. “In the transition from public middle school to the private, predominately white school you currently attend, you lost everything you once knew…,” high school junior Aminah Aliu writes. “In the classrooms where you were the only Black girl—the only Black person—you felt betrayed by the school that let you in but didn’t know how to keep you from falling apart.” From slavery to desegregation to Black Lives Matter, these young people—trying to learn history and civics too, don’t forget—found themselves being used as the filters through which White adults and peers explored difficult and complex topics.

Unfortunately, being asked to “do the work” of representing Blackness for the benefit of White adults and peers was one of the more benign struggles described. Obsessions with students’ hair, skin, and names abound in the book’s essays, poems, and reflections. The authors recount rude questions, intrusive requests, and numerous slights from White kids and g alike. And worse. “I don’t see why you’re worried about getting into college,” begins an unwanted comment recalled by Lydia Patterson in her freshman year at “the bougiest private school” in Houston. “You have affirmative action… You know that’s the only reason you’re here, right?”

An interesting facet of these memoirs is a tonal difference based on age. Pieces from the youngest contributors are often characterized with questions—they wonder if they brought such attention onto themselves by their actions or words, and they long to figure out how to simply exist and learn without so many people watching their every move. “Some will ask why your hair is not straight like theirs,” warns Marissa Glonek to other Black girls following in her footsteps. “Some will stare at you in history class to gauge your reaction to slavery.” The oldest contributors’ pieces are set off from the others by text and design—titled “Thrive Tips”—forming a sort of chorus of affirmation in response to the younger students’ questions. The gist of their reflections is “we survived this, and so can you.” In fact, Clarke herself seems well on the way to turning that corner. Knowing that in the past, she didn’t always feel comfortable to fully be herself, she writes to her younger self: “Take pride in what you have. Take pride in your gorgeous hair and your beautiful melanin. You are enough. You’re beautiful.”

There are plenty of important takeaways from this book. But the biggest is that it shouldn’t be this hard for students of color who seek a new and better learning environment. It is completely awesome that Olivia V.G. Clarke and her peers have taken the initiative to band together and support each other to and through PWI’s. But it would be far more awesome if the staff and students in these schools offered unconditional welcomes and fewer questions and thoughtless comments. There are more and more students of color coming behind Clarke. Policymakers and school leaders must remember that real students are uprooting themselves in search of a better fit. They need more thriving, less just surviving, and no more requests to touch their hair.