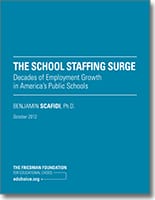 Schools are comprised of teachers, students, and principals…and nurses, speech therapists, paraprofessionals, and librarians…and administrative assistants, reading specialists, transportation coordinators, and other central-office staffers. This Friedman Foundation report (building off the work of others) analyzes the  ballooning of these “other” education jobs—individuals employed by school districts (and paid with taxpayer dollars) who do not directly instruct children. And the numbers are eye-opening: Between 1950 and 2009, the number of K-12 public school students increased by 96 percent. During that same period, the number of full-time equivalent (FTE) school employees grew by 386 percent. Of those personnel, the number of teachers increased by 252 percent, while the ranks of administrators and other staff grew by 702 percent—more than 7 times the increase in students. Though this trend has abated somewhat in recent years, these increases remain dramatic. From 1992 to 2009, for example, the bump in school FTEs was 2.3 times greater than that of students, with forty-eight states upping the number of nonteaching personnel at a faster rate than their increase in students. Even where student populations dropped over the past two decades, public school employment increased. Maine, for example, lost roughly 11 percent of its pupils, yet saw a 76 percent increase in the number of non-teaching personnel. Ohio schools saw a 2 percent increase in student population coupled with a 44 percent increase in non-teaching personnel. These numbers are jaw-dropping when they stand alone. Attach them to salary and benefits costs and they become jarring. Based on back-of-the-napkin calculations, analysts find that if student growth had matched that of non-teaching personnel from 1992 to 2009 and if the teaching force had only grown 1.5 times faster than the pupil enrollment, American public schools would have an additional $37.2 billion to spend per year—the equivalent of an $11,700 a year increase in salary for every American public school teacher. Report author Benjamin Scafidi offers a predictable Friedman-esque solution for this budgetary quandary: Direct funds toward school vouchers. Gadfly offers another fix for district leaders: Slim down your workforce, especially by eliminating ancillary positions—including those in special education—that don’t directly affect real students in real classrooms. The American public is behind you.

Daniela was the development manager and policy analyst for the Fordham Institute. Donning many hats at Fordham prior to this role, Daniela had worked as a research intern, research assistant, and interim new-media manager. She started her career as a teacher of students with emotional and behavioral disabilities, and as a high school rowing coach. Prior to joining forces with TBFI, Daniela was a Global Development…