Earlier this year, two articles published in the Columbus Dispatch claimed that students using vouchers to attend private schools in Ohio perform worse than their peers attending public schools. The focus of the March 8 article and the subsequent March 16 editorial was on extending the third grade reading guarantee to students using vouchers (a measure eventually signed into law). In an effort to bolster this argument, the article referenced data suggesting that 36 percent of third-grade voucher students would be retained compared to only 34 percent of public school students. Other articles in the Cincinnati Enquirer and the Canton Repository made similar comparisons that negatively portrayed the performance of students using an EdChoice Scholarship. However, Test Comparison Summary data released this week by the Ohio Department of Education shows a very different picture of how voucher students are performing. The key is using the right comparison group.

The data used in the articles referenced above incorrectly grouped the results of all public school students in the state, including many affluent public schools, and then compared their results with those of voucher students. However, these scholarships are not available to all students. Students are only eligible for a traditional EdChoice Scholarship if they attended or otherwise would be assigned to a “low-performing” public school. Many such schools are located in Ohio’s less-affluent urban areas. Accordingly, the most accurate comparison is to examine the test results of students receiving EdChoice vouchers with the results of students who are attending a public school that the scholarship students would otherwise be assigned to.

In contrast to the widely circulated newspaper reports, data published by the Ohio Department of Education shows that students receiving vouchers performed considerably better on the reading assessment in comparison to the results of comparable district students. Consider Columbus. In 2013, voucher students in grades three to eight outperformed their district peers in math and reading at every grade level on OAAs and OGTs (see table below). For instance, on the OGT’s, 90 percent of voucher students were proficient in reading compared to 68 percent of public school students. On the math portion of the OGT, 83 percent of voucher students were proficient compared to 55 percent of their public school peers. Similarly impressive scores, with some exceptions at certain grade levels, were posted in Cincinnati, Cleveland, Dayton, and Toledo. 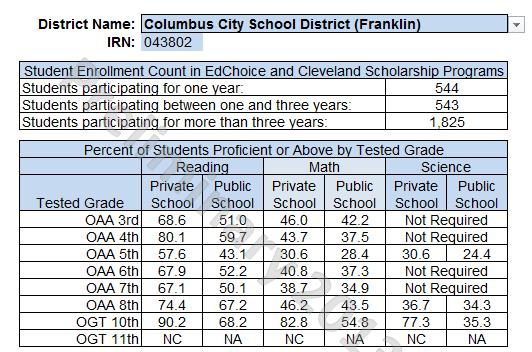 These statistics should not surprise anyone. A study by Greg Forster of the Friedman Foundation for Educational Choice found that eleven of the twelve gold standard studies of the academic impact of vouchers found positive gains. (The other one found no net impact either way.)

These new data are not a perfect picture of academic performance or the “effectiveness” of Ohio’s private schools that take voucher students. (In depth research using student-level data over time would be valuable.) It does not account for students’ performance (which is often below grade level) before they transferred to private schools, nor does it track individual students as they progress over time. What it does, however, is give us a more accurate snapshot of current academic performance compared to the district schools the students may have attended than comparing voucher students to all students statewide.

The department’s recent release of city-level data is the best current available data on academic performance of EdChoice students. It is a far better reference point than comparing voucher students to affluent district schools to which they have no access. How is it fair, for instance, to compare an inner-city Columbus voucher student to an upper-middle-class student in Worthington? It’s like comparing a Pell Grant student at Columbus State to an affluent student attending Harvard. Context matters.

While parents choose schools for their children based on many different factors, academic results are an important gauge of whether students are benefiting from their schools of choice. Reasonable comparisons are essential, too. The state’s data suggest that Ohio’s main voucher program is helping disadvantaged students’ succeed academically. However, true success only comes when we focus on what works best for the unique needs of every child and family.

Yitz Frank is Ohio Director of Agudath Israel of America.

Policy Priority:
School Choice
Topics:
Charter Schools
Thank you for signing up!
Please check your email to confirm the subscription.