Misdirection and self-interest: How Heinemann and Lucy Calkins are rewriting the Common Core 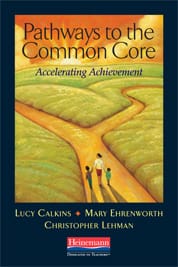 Lucy Calkins, Mary Ehrenworth, and Christopher Lehman—together with their colleagues at the Heinemann publishing house—have just released a new book entitled Pathways to the Common Core. The book sounds like a useful resource that ELA teachers can use to figure out how to align their instruction to the new standards. Unfortunately, it misses the mark. Part ideological co-opting of the Common Core (CCSS) and part defense of existing—and poorly aligned—materials produced by Heinemann, the book is the leading edge of an all-out effort to ensure that adoption of the new standards requires very few changes on the part of some of the leading voices—and biggest publishing houses—in education.

On page one, the authors explain the book’s mission:

Pathways to the Common Core will help you and your colleagues teach in ways that will bring your students to the Common Core State Standards’ level of work in literacy. This book will illuminate both the standards themselves and the pathways you can take to achieve those ambitious expectations. It will help you understand what is written and implied in the standards and help you grasp the coherence and central messages of them….

…Pathways to the Common Core is written for teachers, literacy coaches, and school leaders who want to grasp what the standards say and imply—as well as what they do not say—deeply enough that they can join in the work of interpreting the standards for the classroom and in questioning interpretations others may make. [emphases added]

And question the “interpretations” others propose, they do, as they often contradict not only the guidance released by the lead authors of the Standards (including that found in the “publishers criteria” for ELA, something the authors outright dismiss), but also the guidance included within the four corners of the CCSS document itself. Of course with any set of expectations there is room for debate on some of the finer points. But the lengths that the authors go to explain away the parts of the standards with which they are least comfortable is breathtaking.

The low-level literacy work of sound-letter correspondence and so on—work that dominated the National Reading Panel report (2000) that has undergirded NCLB for years—has been, thankfully, marginalized in its own separate section of the CCSS.

That work, the authors go on, “doesn’t even qualify as part of the reading and writing standards. Reading, in the Common Core, is making meaning.”

Continuing in the same vein, on page twenty-nine, the authors list five essential “Implementation Implications of the Reading Standards.” The first is that “The Common Core’s emphasis on high-level comprehension skills calls for a reversal of NCLB’s focus on decoding and low-level literacy skills.”

These statements are patently false and represent a damaging misdirection of the expectations laid out in the Common Core standards.

The truth is that there is an entire section of the standards—a section that is given the same prominence and importance as the Reading Standards for Literature and the Reading Standards for Informational Text—called “Reading Standards: Foundational Skills (K-5).” There, the standards make the importance of student mastery of these supposedly “low-level” skills abundantly clear, not only by delineating precisely what is expected of students, but also by saying that they “are necessary and important components of an effective, comprehensive reading program designed to develop proficient readers with the capacity to comprehend texts across a range of types and disciplines.”

Unfortunately, rather than deal with the uncomfortable reality that programs that marginalize these critical reading skills are not aligned to the Common Core, Lucy Calkins and Heinemann seem to rewrite the standards to match their own interests.

Another example is found in the focus Common Core places on text complexity. The CCSS are unambiguous in their requirement that all students read grade-appropriate texts. Standard 10, for instance, asks all students—regardless of their independent level—to read texts “at the high end” of the complexity band for the grade. Furthermore, the expectations make it clear that it’s the scaffolding, not the complexity of the text, that should bend to meet students where they are.

To help teachers identify which texts are grade-appropriate, the standards reference specific quantitative and qualitative tools that can be used by teachers. It is important to note two things about this guidance. First, it is focused squarely on matching the text to the grade and the task, not to the reader's independent or instructional reading level.

Second, several tools for judging text complexity are mentioned in the Common Core guidance—Lexiles, ATOS, Flesch-Kincaid, Dale-Chall, etc. Noticeably absent is the best-selling, Heinemann-published and supported, Fountas and Pinnell (F&P) leveling system. Calkins and her coauthors call this absence “puzzling.” But, rather than engage in an honest assessment of why F&P was excluded from the list—and what that might suggest about the alignment of the F&P program to the standards—they simply say:

No doubt Heinemann sales reps can breathe a sigh of relief at that artful parsing of the facts.

Unfortunately...Lucy Calkins and Heinemann seem to rewrite the standards to match their own interests.

Of course, the F&P system may be “similar” to the CCSS criteria, in that they are both used to select instructional texts. But there are several important differences that raise doubts about whether continuing to use the F&P leveling system and its related instructional materials and guidance will ensure teachers are aligning their curriculum and instruction to the level of rigor the Core demands. For starters, F&P is designed to help match books to readers—the precise opposite of what the Common Core demands. And the purpose of the program is to give students “just right” rather than grade-appropriate texts—exactly the practice that the Common Core seeks to end.

Again, it’s unsurprising that a corporation—Heinemann—whose livelihood is defined by selling books, resources, and professional-development services that are different from what the Common Core now demands would seek to explain away differences so that its programs could continue untouched. It’s troubling, though, that thought leaders like Calkins seem to be such eager participants.

In the end, we don’t all need to agree that the expectations laid out in the Common Core are the right ones to guide instruction in classrooms across America. But we will never have an honest discussion about the relative merits of one approach versus another if publishers avoid the difficult conversations and merely seek to bend the Common Core to their own will—and self-interests.