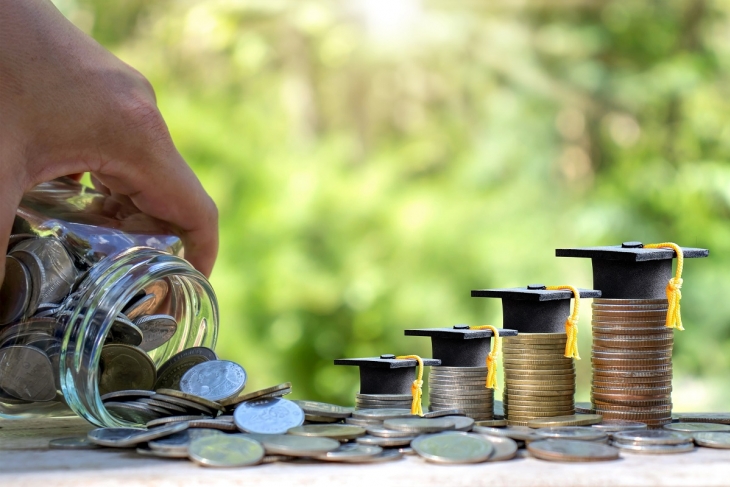 Two years ago, Governor DeWine and the General Assembly enacted a bold initiative that boosts funding for quality public charter schools. The Quality Community School Support Fund provides eligible charters up to an extra $1,750 per economically disadvantaged (ED) student and $1,000 per non-disadvantaged pupil. To tap this $30 million per year allocation, a charter school had to meet certain performance-based criteria (discussed more below). These supplemental dollars narrow the sizeable funding gaps that exist between Ohio’s urban charters and districts, and they help successful charter schools build the capacity to serve more Ohio students.

With two years in the books—and reauthorization looming in the upcoming budget—it’s time to take a closer look at how the program has worked thus far. The analysis below first offers a big-picture snapshot of the program in its first two years of existence. Then it takes a closer look at the newly qualifying schools in year two, as some may wonder whether those schools were worthy additions. Last, it considers how the program might be fine-tuned moving forward.

To receive supplemental funds, a charter school must achieve one of three conditions. In general, the criteria are as follows:

The table below offers an overview of how many Ohio charter schools met these criteria in the first two years of funding.

As the table above indicates, a somewhat surprising number of new schools qualified for the second round of funding. What do we know about these schools? Did they make noticeable improvements to achieve the quality designation?

The figure below displays the year-to-year changes in the performance index (PI) scores and value-added ratings of the twenty-three additional schools qualifying under criteria 1.[2] Encouragingly, a large majority of these charters posted improvements in their PI scores. In fact, the average increase among these schools was 4.1 points, well above the statewide increase of just 0.5 points, and most of the newly qualifying schools also received higher value-added ratings. It’s true that a few schools registered lower PI scores. In a couple cases, however, the school posted high PI scores (despite the one-year decline) and solid value-added ratings, but was simply ineligible for the first year of funding because it lacked 2016–17 PI scores. On the whole, we see that the large majority of the newly qualifying schools improved on two important dimensions of performance, enabling them to join the program in the second year. 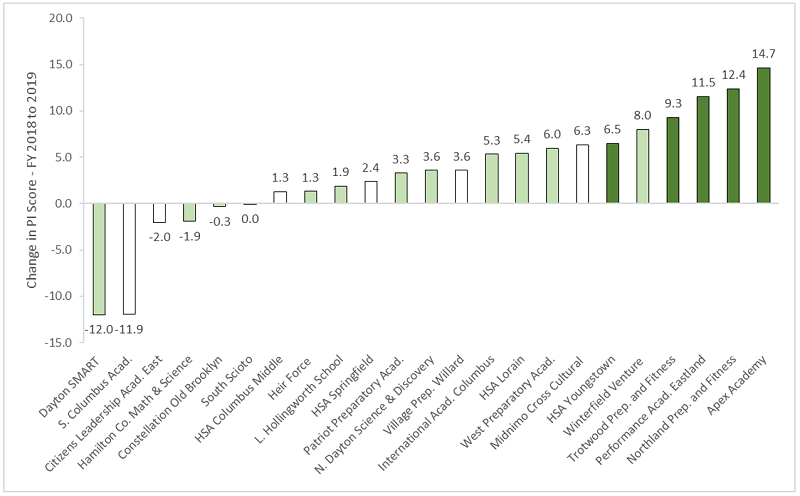 Looking ahead: Make the program permanent

Hats off to lawmakers for establishing this funding program that serves important purposes. While it’s premature to evaluate whether the program has achieved all its goals, it’s definitely on the right track. Many well-deserving charters are now receiving extra dollars that allow them build on their successes and serve more Ohio students.

Yet as currently designed, the major limitation of the program is a funding structure that causes per-pupil allocations to fall when more schools are identified. In the next round of funding, that should change. Legislators have a few options to address this specific problem. Among the more temporary alternatives, they could either: (1) increase the line-item appropriation from $30 million per year to an amount that better aligns per-pupil funding with the number of charters likely to qualify in the next biennium,[3] or (2) slightly raise the performance bar in an effort to concentrate funding on the very best charters.

More ideally, however, lawmakers would cement the program into permanent charter school funding law, thus ensuring that the funds are drawn from the main K–12 education appropriation. Rather than funding the program via a separate line item in the state budget with temporary appropriation language, this option would treat the high-performing supplement like the other components of the charter funding formula (e.g., akin to the extra funding schools generate based on special-education enrollments). Importantly also, this could and should be directly funded by the state and not result in larger deductions from school districts. Overall, this option would ensure that qualifying charters receive the full per-pupil amounts called for under the program, protect the funding from politically-driven reductions or a line-item veto, and give charters more budgetary certainty moving forward. This type of permanency and fiscal certainty is especially crucial for successful charters seeking to open new schools in Ohio—one of the central goals of the program.

As a recent evaluation shows, Buckeye charter schools are making positive impacts on thousands of Ohio students. The schools that have qualified for this supplemental funding are almost surely the ones that are driving these gains. To keep the momentum going, state legislators should proudly reauthorize this valuable program and make it permanent.

[1] Though unintended, nine longstanding, Ohio charter schools qualified under this criteria in the first round of funding based on their operators’ out-of-state performance. The criteria 3 language was updated in House Bill 164 of the 133rd General Assembly to ensure that only out-of-state schools in their first year qualify.

[2] As new startups in 2020–21, none of the six schools added to the quality schools list under criteria 2 had school ratings data for 2018–19. Note also that the design of the performance index and value-added measures were consistent between 2017–18 and 2018–19, so the improvements aren’t a reflection of a policy change.

[3] Should the program be reauthorized, the FY 2022 list would likely be the same as the FY 2021 list of qualifying schools due to the suspension of school ratings in 2019–20 and 2020–21. The FY 2023 list could be compiled based on 2021–22 ratings, with schools meeting the criteria in FY 2021 still being eligible under the provision that allows schools to retain their quality status for two subsequent years.