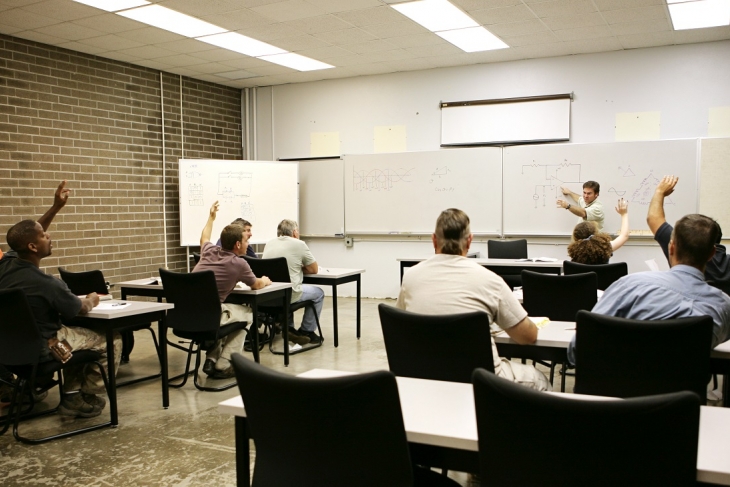 Research has established—and common sense reinforces—that postsecondary enrollment rises when the overall labor market is weak. But that boost could come from many parts of the population, including recent high school graduates attempting to avoid a fruitless job search or individuals who switch jobs voluntarily in response to signs of trouble in a given sector. Very little direct evidence exists on whether workers who actually lose their jobs due to an economic downturn really do head back to school. A new NBER working paper by three researchers from Columbia and Stanford is the first to explore the direct effect of job displacement—as far as the data will currently allow—on college enrollment in Ohio.

The data come from various Ohio state agencies made available through the Ohio Educational Research Center (OERC). They include enrollment data at public colleges and universities in the state, as well as information from all public and private employers subject to Unemployment Insurance (UI) contributions. A majority of employers in Ohio fall under this category, although many workers (contractors, gig employees) do not work for UI-contributing companies. The timeframe covered is the start of the third quarter of 1999 through the end of the first quarter of 2013. Importantly, the earnings records include individual identifiers that link to post-secondary education data. Thus, the analysts can identify the exact quarter when an employee left the workforce (referred to as a “separation”) and when they enrolled at a public college or university. Unfortunately, the earnings records don’t identify the employee’s reason for separation, so it is impossible to definitively determine whether they were displaced due to an economic downturn.

So far, so intuitive. But what happened to those displaced workers? Less than 10 percent of them ended up enrolling in any Ohio public institution of higher education following their separation, and a majority of those were folks going back to school after previous enrollment pre-separation. Of those who enrolled in college, more than a quarter earned a degree within two years of separation and nearly 33 percent did so within four years of separation. If you’re interested in an even deeper dive into this finding, there’s a good but sobering article in a recent edition of Inside Higher Ed. Bottom line: The idea that most displaced workers will retrain or “skill up” after a layoff—at least by enrolling in college—is not borne out by the data.

There are two caveats to point out amidst this somewhat surprising news. First, a significant number of displaced workers enrolling in college after separation were also working at that time. Of those, more than half were employed more than part-time. This is not just an indicator that college enrollment takes money; it is evidence that living in tough economic times requires gainful employment. Second, data limitations mean that individuals who leave Ohio, exit the labor force, begin working for non-UI covered employers, or attend private or out-of-state institutions after separation cannot be tracked. The latter point is particularly relevant as previous research has indicated that for-profit colleges providing short-term certificate programs in high-demand fields are attractive to individuals looking to retrain. The analysts, while unable to fully explore for-profit enrollment data, are able to demonstrate that workers are less likely to enroll in public colleges if they are displaced in parts of Ohio where a higher concentration of for-profit institutions are located. This is likely not a coincidence.

While no recommendations are provided in the working paper itself, discussion from co-author Judith Scott-Clayton at Inside Higher Ed includes this analysis: “When you lose a job, it really is a complex calculus. How do you know when it’s worthwhile to actually step away from the labor market and go back to school? It is a more complicated decision that they’re making. They need guidance counselors, too.” Some of the onus for better guidance to displaced workers falls on the postsecondary institutions seeking to help them, but a more concerted state level effort—especially outreach to those filing unemployment claims—seems a stronger first step.