Ohio's teacher-prep programs: Not as rosy as they seem

There is near consensus that teacher-preparation programs need a facelift. Last summer, the National Center for Teacher Quality (NCTQ) released a withering critique of schools of education, characterizing their programs as “an industry of mediocrity.” Recently, the New York Times editorial board called America’s teacher-training system “abysmal” in comparison to other nations’ preparation programs. When Arthur Levine, former president of the Teachers College at Columbia University, studied teacher-prep programs, he found them to be a “troubled field characterized by curricular confusion, a faculty disconnected from practice, low admission and graduation standards, wide disparities in instructional quality, and weak quality control enforcement.”

Given these well-documented struggles of schools of education—with exceptions of course—you might find it hard to believe that every single teacher-prep program in Ohio, save one, received an “effective” rating from the Board of Regents.

But, let’s dig deeper into the content of the Regents’ second-annual Educator Preparation Performance Report  released this week. The report, required by state law, provides a wealth of information about Ohio’s teacher-prep programs. Here are the three key things to know about the results.

1.The teacher licensure exams: Everyone passes

An astounding 97 percent of Ohio’s teacher candidates achieved the state’s minimum score for passing their subject-matter licensure exam (Praxis II). In some content areas, the passage rate is a remarkable 100 percent. Seriously 100 percent. A closer look, however, indicates that Ohio’s “qualifying scores” are set too low—in fact, they are considerably below the 50th percentile. Table 1 shows Ohio’s qualifying scores required to pass the exam, the national median score on the exam, and the passage rates. The five most-commonly-taken exams in Ohio are displayed.

2. Ed-school ratings: Based on Praxis scores?

Given what we know about the Praxis passage rates, it is odd that they should form the basis of the state’s only “Summary Rating” of educator-prep programs. Not surprisingly, nearly every school of education boasts a 90 percent plus passage rate (“Effective” > 80%). Here are the passage-rate data for ed-schools (schools that reported less than 50 test takers are excluded from the chart):

Figure 1: Virtually all ed-schools do well on Praxis pass rates 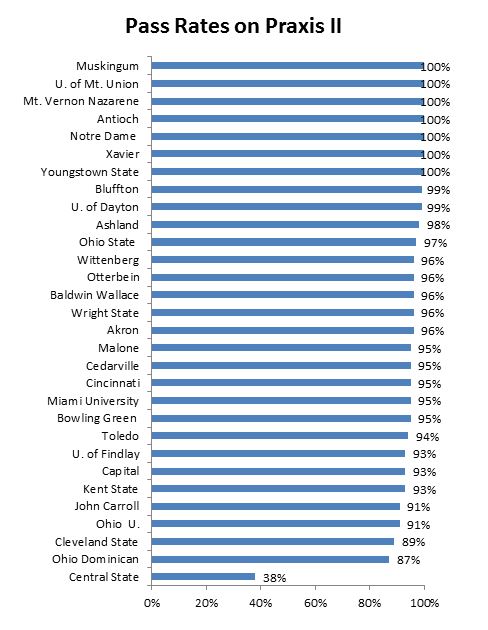 The figure above shows that there is an absence of meaningful information when one rates schools by Praxis II passage rates. Virtually all schools do fine on this indicator. The state can do better than rating ed-schools based solely on Praxis. As it should, Ohio is developing a data system that links a teacher’s value-added scores (indicating the teacher’s contribution to student growth) back to their teacher-prep program. Each institution is seeing its value-added results reported in the Regents’ report, though they are not yet rated by value-add. As the state collects more data and refines its value-added system, ed-schools should be evaluated at least in part based on its alumni’s classroom performance.

The Regents conducted a survey with a very-impressive 3,570 respondents that asked a host of questions about their teacher preparation. When it comes to whether teacher-prep programs were training new educators on the Common Core, the survey indicates that they are doing so. (The survey rates items on a scale of one to four, one = “strongly disagree” and four = “strongly agree.”  For reference, the range of scores is 2.94 to 3.63.)

The two Common-Core-related items were as follows:

It is therefore encouraging that ed-schools are emphasizing the Common Core. But, when it came to helping teachers understand the state’s value-added system—a significant component of an educator’s evaluation—teacher-prep programs fail. The value-added item received the second-lowest rating among the 49 survey items:

This has to be considered a concern. If value-added is to gain traction in the field, teacher preparation programs must begin to educate future teachers about value-added.

The state is absolutely right to put its schools of education under the microscope, and both the Regents and Department of Education ought to be commended for bringing these data points to light. But the report isn’t as rosy as it may seem on the surface. Ohio’s emphasis of passage on the Praxis II—assessments that practically everyone passes—cannot be the basis of a meaningful ed-school rating. Meanwhile, on the positive side, it appears that ed-schools are integrating the Common Core into their curricula—that is a good thing—but much more must be done to help future teachers grasp the state’s value-added system.