Do Ohio’s teacher preparation programs attract the best and brightest?

Among the data released are admissions data, value-added scores of teachers who graduated, and teacher licensure exam scores. These data vastly improve the information we have about the quality of teacher preparation programs—and the students who attend them. 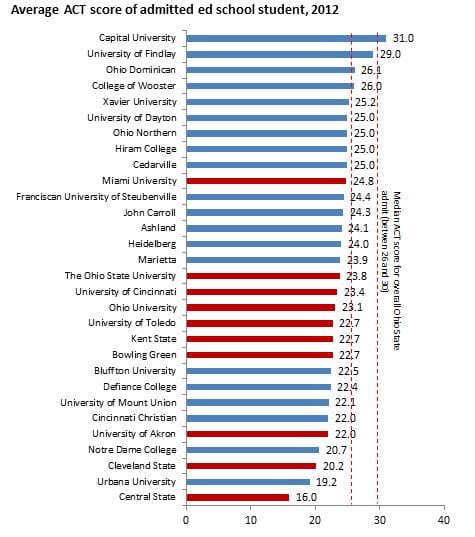 The middling quality of students entering teacher preparation programs prompts questions: Why is this happening and what can be done to attract more talented teacher candidates? These are important questions, since they relate directly to the quality of Ohio’s future teaching force. Twenty-five or so states have already established fellowship programs aimed at improving the quality of its teaching force. North Carolina, for example, has a teaching fellows program that recruits and provides scholarships to 500 high school students who enroll in an in-state teacher preparation program. These scholarships are awarded based on academic merit. According to evaluative research, this program has successfully attracted higher-achieving students into teaching programs.

The data from the Regents demonstrate the need to attract high-achieving students into teaching. Ohio has slowly embraced Teach For America in Cincinnati, Cleveland, and Dayton, and it’s time to expand TFA. In addition, it may be time for Ohio to develop its own teaching fellowship program that attracts high-performing high school students into teaching programs. So, first hats off to the Regents for publishing these data, but now comes the hard part—acting on the data to improve the quality of teachers in the Buckeye State.